Winter chokes the highveld in Johannesburg, South Africa, and takes from me, from our entire culture, a mighty mountain. Gabriel Mabi Segwagwa Thobejane, the diminutive tower of rhythmic power, has left us: a man who did not so much play the drums, but became The Drum.

Even though he was both master and a creator of South Africa’s indigenous sonic archive, Mabi, as we all came to call him, was also a showman and a collaborator. He could and would play in support of almost anyone, from jazz musicians to poets to mainstream artists. He was artistically intimidated by nothing and no one.

Mabi was raised in the township of Mamelodi near the capital city Pretoria, where he absorbed the rural, neo-traditional, urban folk and Sepedi jive drum and dance-song forms that commingled in the streets and backyards.

The young Gabriel had no calling to blow his horn in a church and defied his mother who insisted he become a priest. Her tendency to break up his makeshift drum kits led him to hang about the tanneries and artisanal workshops, collecting materials he fashioned into high-quality hand and mallet drums for which he later became so famous. From early on, Mabi pursued whatever “arrested” (bopha!) him full force without equivocation or compromise. And he was to serve a life sentence in the total reinvention of the highveld’s African percussion.

This single-minded pursuit of a fading musical patrimony from the ancestors ran in the family. Gabriel’s uncle Philip Thabane was already doing so on the electric guitar, forming the Malombo Jazzmen with flautist Abbey Cindi and afro-percussionist Julian Bahula in the 1960s.

Philip’s uncompromising indigenous originality led to a break-up. Before the end of the decade Abbey, Julian, guitarist Lucky Ranku and mbaqanga vocalist Hilda Tloubatla had reformed as the Malombo Jazz Makers. For Philip, only one young performer made the grade: Gabriel Thobejane. They went on to gain local success and world fame as the duo Malombo.

Given the extent of his contribution and influence, there is pitifully little written about my former bandmate Mabi. In my book In Township Tonight! South Africa’s Black City Music and Theatre I wrote about Malombo:

This duo revolutionised progressive indigenous music in South Africa from 1965 to 1977. Their first recording appeared in 1968, and in 1971, Philip and Gabriel travelled to the United States where they appeared at clubs and concerts around the country for two years, playing with Miles Davis, Max Roach, Pharoah Sanders, McCoy Tyner, and other first rank jazz musicians … In 1973 (they) returned home to perform for and learn from their own people in the Transvaal townships.

Malombo’s 1976 album Pele Pele and their 1977 appearance at the New York Newport Jazz Festival continued to build their international reputation. Their recordings, I wrote in the book, could not hope to capture the electricity and spellbinding virtuosity of their live performances. I had the privilege of performing with Malombo as a percussionist at many of their South African appearances at the time. I wrote:

Philip and Gabriel kept up a constant, almost competitive musical dialogue on guitar, kalimba (hand piano), flute, pennywhistle and drums. The intensity of Philip’s guitar solos and melodic poetic recitation, and Gabriel’s percussive power and dynamics with drums, dance, and ankle rattles kept black and white concertgoers alike jumping and shouting on the edges of their seats. Truly innovative creative departures in black South African music tend to create their own trends and offshoots, and this was certainly true of Malombo.

Mabi Thobejane in Malombo, led by his uncle Philip Tabane.

Mainstream bands such as Sipho Mabuse’s Harari and later Ray Phiri’s Stimela were influenced by Malombo. As were the “alternative” black consciousness ensembles that often included spoken and sung poetry that appeared in the late 1970s, such as Dashiki, led by the soon-to-be-exiled poet and artist Lefifi Tladi, Thabang Masemola’s Batsumi, and the Malopoets, precursors of rappers like Prophets of Da City.

In some ways Mabi Thobejane’s great initial achievement was his ability to partner with the introverted, crusty Philip Thabane for so long. Quite the opposite, Mabi was unsurpassed as a joyful jester and musical comrade. He loved and accepted his unpredictable fellow musos. I witnessed many a musical showdown between Thabane and Thobejane on stage. After a difficult return tour to the US in 1977, they went their separate ways. 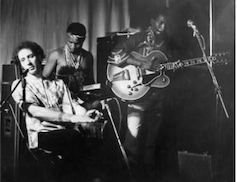 The author (left) performing with Malombo.

By the 1990s Mabi had started to find an outlet for the sounds that had stayed with him from the Bronx. He continued being involved in some of the most exciting collaborations – with bassist Sipho Gumede and saxophonist Khaya Mahlangu, guitar master Madala Kunene, percussionists Amampondo. For a decade he toured and haunted the electronic, eclectic studio sessions with UK act Juno Reactor, who released the legendary acoustic/electronic percussive remixes of Conga Fury.

Mabi was as much a showman and a performance event as he was a musician. He not only built his own drums, but created his own costumes of beads, antelope and cattle hides and distinctive body paint. Characteristically he would perform stripped to the waist, his face painted half chalk white and half charcoal black, his compact brown torso covered in white spots like a reverse-image leopard. His intention was to conquer his musical world as a drum guerrilla representing himself and his deeper Tshwane origins, without hybridity, without borrowing. And in that guise, what a lender and a collaborator he turned out to be.

As a proper morena oa lefatse (king of the earth), Gabriel Mabi Thobejane revealed the inner character of the people of the land in both musical expression and force of personality. He entered so many of our lives in unique modalities that enriched our worlds forever. I cannot do better, before returning to shocked silence at his passing, than to share a new poem by the musical commentator and scholar Sam Mathe. In For Gabriel Mabi Segwagwa Thobejane Mathe refers to Mabi as segwagwa, the frog, the creature he physically resembled that became Philip Thabane’s musical praise name for him:

The bullfrog that croaks in the streams

and lagoons inhabited by ancestral spirits

the elusive amphibian that greets springs

with the gravel voice and tone of a groaner

The showman with deft magical hands

The shaman who plays healing sounds

on baobab drums crafted by the gods

In the south the cold season is upon us

the rains are gone, rivers have dried up

it is time for you to go into hibernation

farewell grandmaster of the percussion

Till we meet again when the rainclouds gather